The library was given to the people of Boca Grande and the Charlotte Harbor area by Roger and Louise Amory of Boston, Massachusetts. In 1949, the Amorys pledged 68 shares of stock worth $44,200 and a loan of $10,000 to fund the inception of the Johann Fust Community Library of Boca Grande, Florida, Inc.

That same year, the property on west 10th Street was purchased at an approximate cost of $6,500. Prominent Boston architect, Henry Richardson Shepley, was selected to design the structure. The library was constructed by local builders, the Griffin Brothers. The structures included the main library building, which contained an apartment on the second floor for a librarian, a garage, potting shed, garden and loggia. A modest cottage was built next door to the library for the use of Thomas Cost, the library superintendent, and his wife Pansy, the librarian. The Costs lived in the cottage until they passed away in 2004 and 2005.

Mr. Amory named the library in honor of Johann Fust, whom he thought deserved prominent recognition as the financier of Johann Gutenberg’s movable type printing press. The first major book printed using this method – The Gutenberg Bible – marked the beginning of the “Gutenberg Revolution” and the age of the printed book as we know it today.

The library opened for business on January 1, 1950 as a non-profit, privately endowed institution.

Its first Board of Directors consisted of Mr. and Mrs. Amory, Delmar Fugate, Jefferson Gaines, Rodney Sharp and Pershing Thompson. 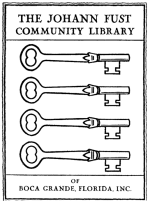 A bookplate was designed as a hallmark of the library featuring the images of four parallel skeleton keys representing the keys to happiness and success: Effort; Aptitude; Education; and Contributing to the Good of Society.

Throughout the years, the generosity of the Amorys continued with multiple unrestricted gifts of land, books, art, grants, and forgiven “loans” to ensure the success and viability of the library. In 1955 the library was fully operational and debt free. Annual membership cost just $1.00 per year from its inception until 1975.

In order to contribute more richly to the community of Charlotte Harbor, Mr. Amory’s personal boat was put into service for use as a book boat. Its voyages continued from 1951 to 1954 when the Papyrus II was commissioned in its place.

The boat made trips three times each week carrying books and library materials to the nearby communities of Bokeelia on Pine Island, Useppa Island, Cabbage Key, Mondongo Island, and Captiva Island. Captains Adelbert “Del” Johnson, Thomas Cost, or the Amorys continued this unique boat service until 1972.

The Du Pont family donated a dock to the library to serve as a launching point for Papyrus II. Years later the dock was sold to Wyman Miller who had a close relationship with the Roger and Louise Amory. He had helped them with the library. On the dock site, became the beloved Miller’s Marina – now called “Boca Grande Marina.”

In 1959, the Amorys built the Shiloh Baptist Church, known today as Amory Memorial Chapel, for the island’s community of African-Americans. The chapel is located at the south end of the island, near the Boca Grande Lighthouse in Gasparilla Island State Park. The Johann Fust Library owned the chapel until 1986 when it was gifted to the Gasparilla Island Conservancy and Improvement Association (GICIA), which turned the property over to the State of Florida in 1987 to become part of the state park.

Children’s education was an important consideration for the library founders. A cozy children’s library was maintained in the room that now serves as the executive office. In an area behind the Cost Cottage, students planted gardens to help them acquire horticultural skills and personal responsibility. For a number of years, the library offered two $300 awards to seniors graduating from the island’s original secondary school to further their studies.

The loggia was often used on Saturday afternoon to broadcast the Metropolitan Opera radio programs.  Other times, the grounds served as a beautiful display area for shows and sales of local artists in collaboration with the Boca Grande Art Alliance.

In a shady spot to the west of the library, the original cottage named for Pansy and Thomas Cost is now used by the foundation for special events and rentals. There are benches, chairs and tables located throughout the shaded area behind the Cost Cottage for library patrons to enjoy. The charming two-bedroom, one bath Old Florida style cottage was renovated in 2020 and is currently rented. 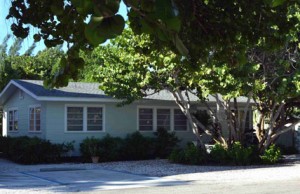 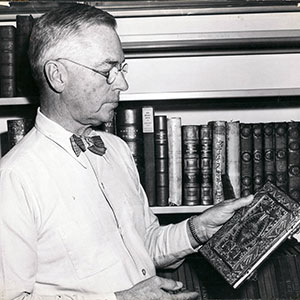 Roger Amory, a Boston attorney and lover of books, had a magnificent collection of manuscripts and rare first editions. He was a passionate devotee of the arts. He and his wife Louise began wintering in Boca Grande in the 1940s and were inspired to build a structure which would not only reflect the island’s unique beauty, but also provide a place to enjoy the pleasures of literature and other cultural refinements.

Louise Amory Tilney was a true partner with her husband Roger Amory in the creation of the library and was an integral part of its success. After her husband’s passing, she served as the president of the board of directors and was made librarian in 1971, along with Pansy Cost. 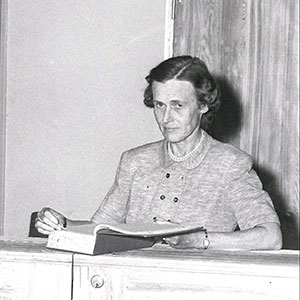 Roger and Louise Amory depart on the Papyrus II for a weekly book boat run to the sister islands. This unique library service, carrying literature to island residents throughout Charlotte Harbor, continued until 1972.

Pansy Cost grew up on Gasparilla Island. As a high school graduation present, her parents gave her the gift of a trip to Alabama. While there, she decided to attend the Wheeler School of Business in Birmingham, where she received a formal education and met her future husband, Thomas Cost. After their marriage and the birth of a daughter, Lonnie-Beth, the Costs settled in Boca Grande. In the late 1940s, Roger Amory approached Pansy to help set up and run the Johann Fust Community Library. She was on the steps for its grand opening. She and her husband served the library with devotion for 50 years. 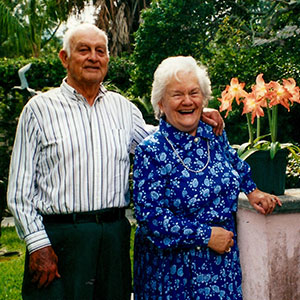