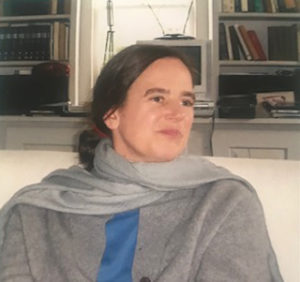 The Library Foundation is honored that author and poet Susan Brind Morrow will speak in the Houghton Room. She has written extensively on language and metaphor drawn from the natural world.

Ms. Morrow studied hieroglyphic texts as an undergraduate and graduate student in Classics at Columbia University in New York. She first went to Egypt as an archaeologist on the Dakhleh Oasis Project. She continued in Egypt and Sudan as a fellow of the Institute for Current World Affairs. While there, she lived with the nomadic population, studying the Arabic language and desert traditions with a particular interest in the origin of hieroglyphs in the desert environment. This decade of work became her first book, The Names of Things: A Passage in the Egyptian Desert, one of three finalists for the Pen Award in 1998.

Ms. Morrow’s analysis, translation, and commentary of the hieroglyphic text in the Pyramid of Unis, The Dawning Moon of the Mind: Unlocking the Pyramid Texts, was published by Farrar Straus and Giroux in 2015. She is also the author of Wolves and Honey: A Hidden History of the Natural World.

Her papers are studied as part of The Sowell Family Collection in Literature Community and the Natural World at Texas Tech University. Ms. Morrow’s work has appeared in Harper’s, The New York Times, The Nation, The Seneca Review, and Lapham’s Quarterly. She is a fellow of The New York Institute for the Humanities and a former fellow of the Guggenheim Foundation.