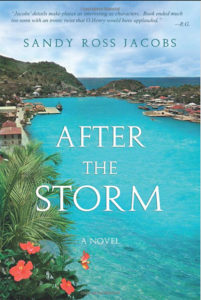 Boca Grande author Sandy Jacobs will speak in the library loggia on March 1, 2022. Sandy has written many articles and stories for magazines and newspapers, but it wasn’t until she was eighty that she began to write books. She has now written three novels. Her first book, Francie’s Story, was published in 2020. Earlier this year, she released Tropical Disturbances, and its sequel, After the Storm, has just been published.

Francie’s Story deals with the life of an Irish teenage girl whose circumstances cause her to leave Ireland to make a new life for herself in the United States.

Sandy’s latest two novels are part love story, part character study, and part family dynamics. Tropical Disturbances tells the story of Sylvie and Hugo Deschamps. With their two children aboard their 42-foot sailboat, Bateau de Rêve, they set out from France to cross the Atlantic in an attempt to rebuild their marriage. But life on a tropical island isn’t as peaceful as they imagined. 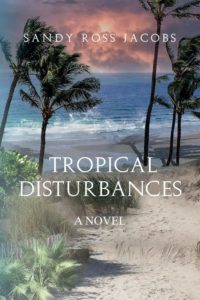 After the Storm revisits the tropical island of St. Dominic a few years after personal tragedies and a major hurricane wrecked homes and lives on the island. The prologue summarizes the story told in Tropical Disturbances, and the new story takes off from there. Readers can enjoy After the Storm as a standalone novel or as a sequel to the former book.

Sandy’s talk will be followed by a book signing.
Please note the Library Foundation health and safety protocols.
Although the event is offered at no charge, tickets are required.