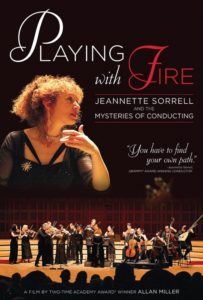 Jeannette Sorrell and the Mysteries of Conducting

Two-time Oscar-winning director Allan Miller takes us behind the scenes to explore the mysterious art of conducting. The documentary film follows GRAMMY®-winning conductor Jeannette Sorrell– one of today’s most interesting conductors and a vivid interpreter of baroque and classical music.  Sorrell, told by the Juilliard School and The Cleveland Orchestra that no one will hire a woman conductor, forms her own Baroque orchestra, Apollo’s Fire, to immediate acclaim.

The film shows Sorrell working and teaching at the Aspen and Tanglewood Music festivals, and includes rehearsal scenes with two GRAMMY®-winning orchestras – Apollo’s Fire and the St. Paul Chamber Orchestra. The role of the conductor as storyteller emerges as Miller pursues the secrets of a conductor’s art.

This registration is for the screening which will be held in the auditorium.
To protect the health of all attendees, we request that if you are attending this live event, you wear a mask.
Although the event is offered at no charge, reservations are required.