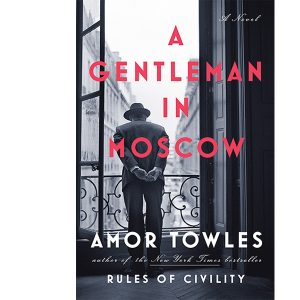 Amor Towles
A Gentleman in Moscow


(This Event is Sold Out)

Amor Towles has been winning the hearts of critics and readers alike.  The JF Library Foundation is proud to present this best-selling author at our Annual Benefit on February 20, 2018.  (This event is sold out.)

Amor Towles’ “brilliantly realized… [and] sharply stylish” (The Boston Globe) debut novel, Rules of Civility, was one of 2011’s biggest breakout literary bestsellers. In Rules, Towles marvelously evoked touchstones like F. Scott Fitzgerald and Edith Wharton, bringing late 1930s Manhattan to life with splendid atmosphere and a flawless command of style. In A Gentleman in Moscow his highly anticipated second novel about a thirty-year-old Russian aristocrat who is sentenced to house arrest inside the luxurious Hotel Metropol, Towles further establishes his reputation as one of contemporary literature’s most exciting and singular writers.

A big novel that embodies the grandiloquent style and spirit of Russia’s Golden Age of literature, A Gentleman in Moscow, published by Viking Press, is a captivating story of personal and emotional discovery that spans more than three decades and takes place almost entirely within the walls of a single building. Brimming with humor and wit, an unforgettable cast of characters, and one beautifully rendered scene after another, this remarkable novel casts a spell as it relates the Count’s endeavor to gain a deeper understanding of what it means to be a man of purpose.

About the Author
Amor Towles was born and raised just outside Boston, Massachusetts. He graduated from Yale and received an MA in English from Stanford. For many years a principal at an investment firm in Manhattan, he now devotes himself full time to writing. His first novel, Rules of Civility, published in 2011, was a New York Times bestseller in both hardcover and paperback. Towles lives in Manhattan with his wife and two children.

For reviews and reader notes about A Gentleman in Moscow visit www.amortowles.com.