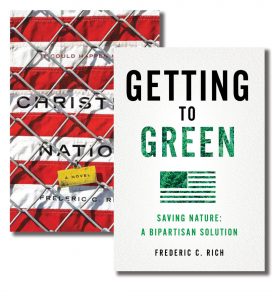 Literary Series
with Fred Rich
"Writing as a Second Career"

A partner of New York law firm Sullivan & Cromwell, Fred Rich was recognized as “the preeminent project finance lawyer in the world.”  And then, in 2014, having reached the peak of his profession, he abruptly announced to his surprised partners and clients that he was switching careers.  To banking, perhaps?  Politics?  No, to be an author.  And therein lies a story.

Today, Rich – who does a two month writing retreat each year here on Gasparilla Island – is an author who says his writing, both fiction and non-fiction, is meant to probe contemporary political and moral issues from a fresh perspective.  Rich describes that perspective as “independent, non-partisan, and pragmatic.”

His most recent book, Getting to Green, Saving Nature: A Bipartisan Solution  (W.W. Norton, 2016), tells the story of how the American environmental movement lost its way and explains how it can get back on track. The book contains a rousing call for conservatives to reconnect with their long tradition of support for conservation and for the Green movement to adopt the reforms necessary to restore bipartisan support for the environmental agenda. In a starred review, Booklist called it “clear, thorough [with] much strong analysis…This informative, fair, probing, and heartfelt book should enliven all environmental debates.”

His first book, Christian Nation (W.W. Norton, 2013), is a work of speculative fiction that considered the political ambitions of Christian fundamentalism in America, and sounded the alarm that the far-right fringe was poised to break into the mainstream. The novel was called “brilliant” by Richard Dawkins, “well written and persuasive” by the Pittsburgh Post-Gazette, “required reading” by the New York Post, and “riveting, provocative reading” by Booklist.

Fred will weave the story of these two books into the narrative of his career path, and also give the Fust Library audience the first public description of his third work, another novel, which deals with genetic editing, the emerging science of “de-extinction,” and the mystery of Neanderthal extinction.

Rich studied public and international affairs at Princeton’s Woodrow Wilson School and moral philosophy at King’s College, Cambridge, before receiving his law degree at University of Virginia Law School.   He lives in Manhattan and the Hudson Valley.