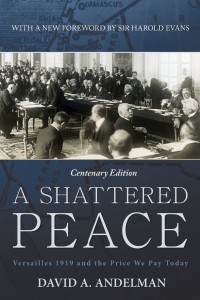 Versailles 1919 and the Price We Pay Today

For more than half a century, it has been widely recognized that the Treaty of Versailles, founded on retribution against Germany and the Austro-Hungarian Empire, created the circumstances that led inevitably to World War II. Less acknowledged and understood is the treaty’s profound impact on many other parts of the world―an impact that echoes to this day across Asia, the Balkans, and throughout the Middle East. In A Shattered Peace, veteran foreign correspondent David A. Andelman takes a fresh new look at the Treaty of Versailles as the point of origin for many of today’s most critical international issues. This revealing history exposes the powerful lessons that a six-month period in a long ago era has for us today. Andelman turns the spotlight on the many errors committed by the peacemakers that directly led to crises and bloodshed from Algeria to Kosovo and wars from Israel to Vietnam. Focusing on the small nations and minor players at the negotiations, including figures such as Ho Chi Minh and Charles de Gaulle who would later become major names, he traces the outcome of the deliberations through the history of the twentieth century and into the twenty-first. His conclusion is ominous: not only did the paternalism, ignorance, and self-serving approach of the Great Powers who sculpted the treaty lead to disastrous consequences that were predicted at the time, but current policies of the world’s developed nations continue to repeat and reaffirm these same mistakes. Andelman also paints a vivid picture of the glittering and often chaotic social whirl that accompanied the negotiations. Elsa Maxwell threw her first party; young Franklin Delano Roosevelt flirted with Parisian widows to the humiliation of his wife, Eleanor; princesses and young gentlemen in formal attire danced gaily to the hot new sound of American jazz―all this as prime ministers Georges Clemenceau and David Lloyd George ogled huge maps, dividing up territories and cementing their nations’ positions as leading world powers for decades to come. Complete with a new preface by Sir Harold Evans, a new introduction from the author, and a never-before-published chapter on establishing a global economy, as well as insightful quotations from the diaries and correspondence of participants and previously unpublished photographs of the proceedings and their surroundings, A Shattered Peace will change the way you think about twentieth-century history, its influence on current events, and where we should go from here. 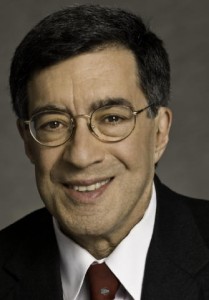 David A. Andelman (born October 6, 1944 in Cambridge, Massachusetts) is the editor-in-chief of World Policy Journal, having previously served as the American executive editor at Forbes.com and was a news reporter for The New York Times, based in New York, Southeast Asia and Eastern Europe, and CBS News, based in Paris. He has also worked for The New York Daily News as the business editor, CNBC as Washington correspondent and Smallcapcenter.com as editor-in-chief. He is the author, most recently, of “A Shattered Peace: Versailles 1919 and the Price We Pay Today,” a look at the origins of many of today’s deepest global crises including the war in Iraq.

Andelman also co-wrote “The Fourth World War: Diplomacy and Espionage in the Age of Terrorism”, a book of memoirs and opinion with Alexandre de Marenches, a former head of French intelligence, and “The Peacemakers”.

In the summer of 2008, Andelman was named editor of World Policy Journal.

In the summer of 2010, Andelman was elected president of the Overseas Press Club of America.

Andelman is also a member of the Board of Contributors of USA Today, writing columns dealing with international affairs.

He is also a member of the Council on Foreign Relations, the Leadership Council of the Committee to Protect Journalists, the Century Association of New York, the Grolier Club and the Harvard Club of New York City. He is a graduate of Harvard College and the Columbia University Graduate School of Journalism.