Tickets are sold out. 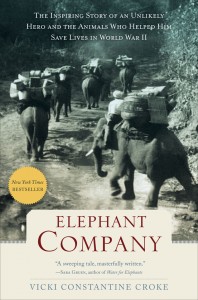 In partnership with Friends of Boca Grande Community Center and The Gasparilla Inn & Club. Free, but tickets will be required – information available in December.

For the second year, the JF Library Foundation, the Friends of Boca Grande Community Center, and the Gasparilla Inn & Club are joining to sponsor this free, community-wide reading event. This inspiring, true story of an unlikely hero and the animals who helped him save lives in World War II was the clear favorite in the community balloting.

They are pleased to announce that the author, Vicki Croke, will be the featured speaker. Other parts of the program may include a talk by experts from an elephant sanctuary in Florida, children’s programs, movies and music. Some members of the committee have already been heard humming Henry Mancini’s “Elephant Walk.”

She covers all creatures for NPR’s national newsmagazine show Here&Now, as well as online for WBUR’s The Wild Life (thewildlife.wbur.org). Her work there earned a 2013 regional Edward R. Murrow Award.

She is the author of The New York Times Bestseller “Elephant Company,” the story of J.H. Williams and the elephants he led for the Allied Forces in WWII. She has also written The Lady and the Panda: The True Adventures of the First American Explorer to Bring Back China’s Most Exotic Animal, and The Modern Ark: The Story of Zoos—Past, Present and Future.

Croke has worked on nature documentaries for Disney and for the A&E channel and anchored The Secret Life of Animals on NECN-TV.

She wrote The Boston Globe’s “Animal Beat” column for thirteen years, and has contributed to The New York Times, The Washington Post, The London Sunday Telegraph, Time, Popular Science, O: The Oprah Magazine, Gourmet, National Wildlife, and Discover magazine, among others. She lives in the Boston area.